How Could the Federal Government Spend So Much and Get So Little?

When I wrote my original blog post about Healthcare.gov, I thought the web site was created by incompetent people. Now I believe that in addition to being incompetent or inexperienced, decisions were made to maximize contractor profits.

This is philosophically different from the way we think at FMS. We always want to deliver functional systems on-budget and on-time. We take pride in creating solutions that don’t require additional work to fix them. As a small firm, we’re held accountable for our deliverables. If we fail, we would never be invited back. For large government IT contractors, it’s a totally different world.

Over the years, many large IT government contractors have abused taxpayers so often that they forgot the public would actually use Healthcare.gov and judge their performance. Even now, with their legions of lawyers and media spin, they are deflecting the story to blame government officials, other contractors, etc. without taking any responsibility. I agree there were problems with other parties, but that’s in addition to their own behavior.

Charge Extra for What Should be Included

Government contractors are experts at adding change orders and generating more revenues for features that should be already included. For instance, we are now hearing about problems with data security for the Healthcare.gov site. Security should be implemented from the beginning. Anyone with any experience collecting personal information such as social security numbers and birthdays knows that. However, the government contractors who won these contracts based on “past performance” suddenly suggest others are to blame for not specifying it earlier. That’s like buying a car and discovering brakes were an add-on. No, it should be included without asking for it. Storing data requires doing it securely.

Too Big to Fire

Given the awful work delivered on October 1, there’s no chance that the same team can be trusted to deliver a functional system. They already showed the world what they considered shipping quality, yet they remain. Unfortunately, our existing procurement system keeps these large government contractors because they are simply Too Big to Fire.

No Accountability for Large Technology Contractors

A small government contractor that performed so badly would not be allowed back into these agencies. The large ones can deflect the blame and legally challenge any attempt to hold them accountable. They never issue refunds, and in fact, profit from their mistakes with awards of new contracts and change orders. They are effectively not held accountable for their awful past performance, so the disasters repeat themselves whether it’s at HHS, FBI, Air Force, IRS, etc. The federal government is littered with expensive projects that were never used or functional, but highly profitable for the contractors.

Our Government Contracting System Encourages This

What happened with Healthcare.gov is exactly what our system encourages contractors to do. Had the contractors finished on time and properly, they would have made less money than delivering a flawed system. The government has tried to privatize its services by using outside contractors. Unfortunately, these government contractors are specialists at getting government contracts and milking taxpayers more than their technical ability. They would never survive in the private sector.

This is the first time an administration has paid such huge political cost for mismanaging technology. Prior to this, Presidents understood they were responsible for the economy, jobs, wars, terrorism, crime, responding to natural disasters, etc. They never realized there was political risk with technology. President Reagan wasn’t blamed for the Space Shuttle exploding, but this administration has become responsible for this web site disaster.

Contractor Goals and Values Do Not Align with Policy Makers

Frankly, I don’t think the politicians have any better handle for designing rockets or web sites. They relied on contractors and these contractors misled them. The policy makers don’t realize the goals and values of the contractors differ from theirs. Watching our leaders say the self-serving things their contractors tell them is even more embarrassing. Those contractors are not your friends!

Some government officials are swayed by promises of post-retirement jobs at the contractors they supervise. Look at all the former program managers, contracting officers, Congressmen, admirals and generals at these government contractors and their lobbyists to understand how business is done.

Contractors get on contracting vehicles like the IDIQ for Healthcare.gov (termed “Licenses to Hunt”), then send in their well connected people to get contracts directly or wire contracts by “helping” draft requests for proposals (RFPs) favoring their organization. Perfectly legal. Not taxpayer friendly.

This is a bipartisan issue because unless IT government contracting is reformed, this is going to bite future politicians/policymakers of both parties. They do not have the training or experience to manage these technology projects. Especially when the contractors are run by used car salesmen who say, “You should get the undercoating” and the government people are technically unqualified to say “No”.

We need the creation of a Technology Accountability Office (TAO), similar to the GAO to help agencies properly manage and buy these solutions, or an agency that manages large IT projects so the Best Practices are dispersed across the agencies. Right now, politicians have no clue whether a project should cost $1 million or $100 million, and whether it can be done in 3 months or 3 years. It’s total chaos and taxpayers are paying the tab.

Here are a few opportunities where I’ve spoken about these issues.

A one-on-one interview with Clayton Morris for four minutes discussing how large government contractors profit from delivering systems that don’t work: “If we follow the money, we’ll see the stink in the system…Too Big to Fire” 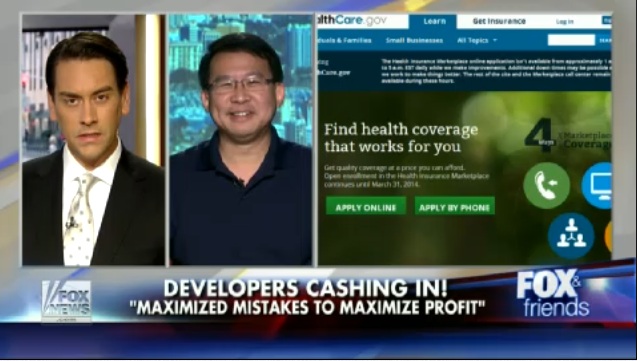 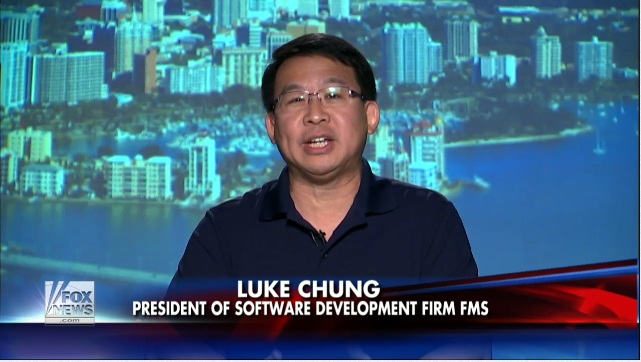 November 26: On the Record with Kimberly Guilfoyle

Will HealthCare.gov be in good health by Nov. 30?

Greta van Susteren is on vacation, so I chatted with Kimberly who was in New York City while I was on Greta’s studio in Washington, DC. 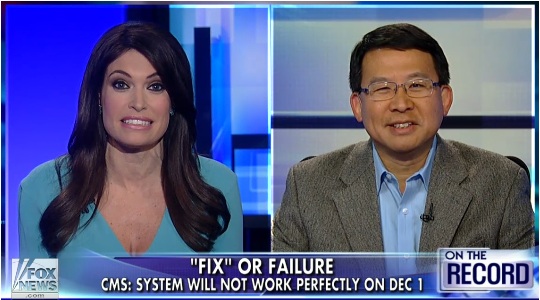 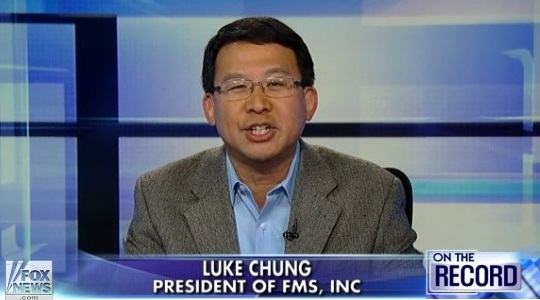 “Over time, I’m beginning to see that these government contractors who took over this project have essentially made every decision that favors them as much as possible – to maximize the cost to taxpayers, to maximize their profits.”

I had the opportunity to discuss the problems with government IT contractors in my prepared testimony and questions from Chairman McCaul. 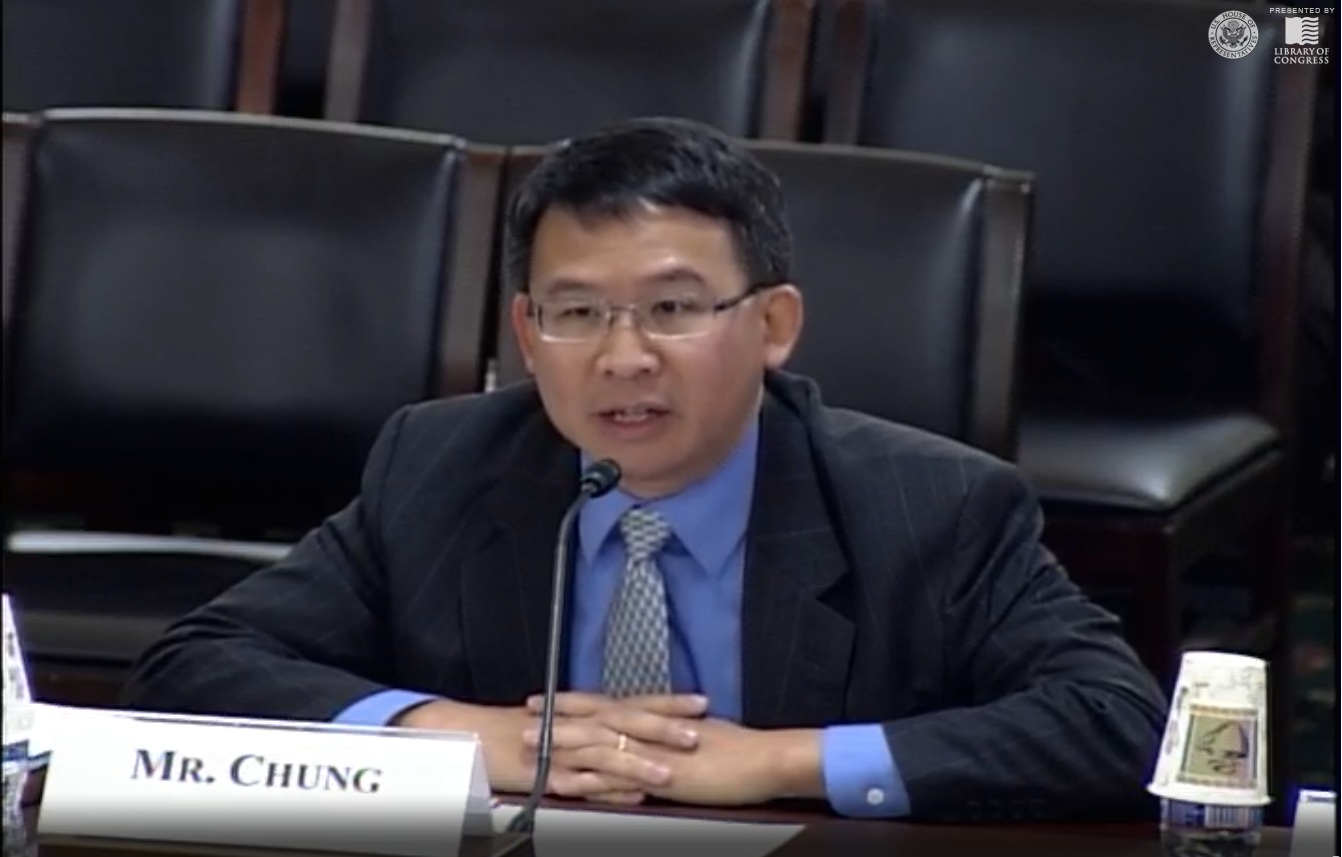 Testifying before the House Committee on Homeland Security

“Luke Chung is the best authority I’ve come across on the Obamacare software debacle.”

How contractors got rich by screwing up Obamacare

Additional Media Coverage for Changing the National Discourse on Healthcare.gov